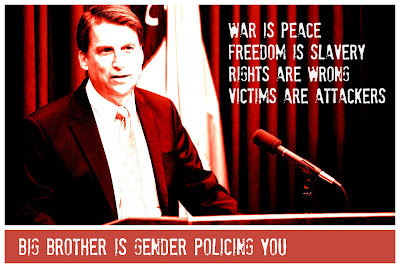 Pat McCrory, Governor of North Carolina, has been voicing a complaint of late. He is extremely annoyed at the "outside influences" that are protesting his signing of HB2, a law banning trans people from using bathrooms that match the genders in which we are lving, and banning local governments from passing protections for LGBT+ people.

The word he keeps using is "Orwellian." He claims that LGBT+ public interest groups are Big Brother, watching everyone and policing their speech for political correctness. Orwellian! He warns that apparently independent groups protesting the new law are actually being coordinated by a powerful entity, the Human Rights Campaign. Orwellian! The HRC and its minions are intimidating ordinary people and quashing dissent while claiming to be protecting freedom. Orwellian!

You know what's really Orwellian? Presenting trans people's use of bathrooms that match our gender identities--something we've been doing for decades--as something that didn't exist until a couple of weeks ago when Charlotte passed a civil rights bill protecting LGBT people. (As Orwell wrote, those who control the present control the past.) Presenting trans people using bathrooms that match our genders as a new attack on our "basic bathroom norms" that the state was "forced" to reverse is a move right out of the Ministry of Peace. Presenting the real victims of violence--trans women--as predators endangering cis women is a move right out of the Ministry of Truth.

Pat McCrory and the North Carolina legislature have empowered the entire populace of the state to engage in gender policing trans people's bodies. Big Brother is gender policing you--now that's Orwellian.
Posted by Dr. Cary Gabriel Costello at 9:01 AM 1 comment: