On Trans* People and Suicide 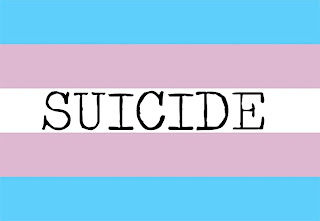 A person who is dear to me has been having a very hard time.  She's a trans* woman, and she's socially isolated.  Her family of origin hasn't been supportive of her gender transition. Her trans* status is visible, and she faces regular gender-policing street harassment and the everyday indignity of being misgendered.  She has trouble finding work due to transphobic discrimination, and recently lost her part-time job.

I'll tell you more about her story, but first, there are some facts that you should know.

If any statistic shows how difficult life is for trans* people it is this:

Remember, that's not the percentage of trans* identified people who "merely" consider suicide--41% of trans* Americans try to kill themselves.  These statistics are from the National Center for Transgender Equality's large survey of 7000 trans* people, which you can read here.

It's not hard to understand why a trans* person is over 25 times more likely to attempt suicide than a cis gender person.  Just consider more statistics from the full report on the survey, available here:


Living with the degree of social stigma and violence that are aimed at trans* people is hard.  And the very people whom we are told to turn to when we are despairing--doctors and therapists, family members and religious figures--often compound our distress instead of reducing it, due to their own transphobia.

Which brings me back to the story of my trans* woman friend.  She turned first to her small circle of friends for help, but while they were sympathetic and supportive, many of them, like her, were trans*, and dealing with their own difficulties.  She didn't want to overburden them.  So she tried posting about her unhappiness with her life circumstances on Facebook, but got a bunch of responses that were either unhelpful ("just keep on smiling and don't let things get you down!") or victim-blaming ("you're the one who decided to gender transition, so you have to deal with the consequences").

So recently, late at night, crying alone in her room, she called the National Suicide Prevention Helpline.  A man with a Southern accent answered, and asked her the standard questions, like "have you formed a plan to kill yourself?"  After several minutes, when he was talking with her about whether there were friends she could turn to, she told him she was a trans* woman, and that that had limited her social circle.

There was a pause, and then the man at the National Suicide Prevention Helpline hung up on her.

It is transphobia like this that explains that 41% attempted suicide rate.

People, it is important that we do all the positive things like celebrate trans* agency and creativity and resilience.  No, trans* people aren't mere pitiable victims.  But we can't just sit around telling success stories about how D.C. Comics now has a trans* character in the Batgirl series, and Chaz Bono is a household name, and public attitudes toward same-sex marriage have crossed over into positive territory.  Homophobia may be on its way out, but transphobia remains horrifically virulent.  We have to keep reiterating the appalling statistics about discrimination that people who are trans* and/or gender-nonconforming face every day.  And we have to keep taking action toward reducing the shockingly high rate at which trans* people attempt suicide.

About my friend--she made it through the night.  In fact, she found ironic amusement in being hung up on by a suicide prevention worker which gave her some strength, if bitterly earned, to persevere.

But we as a society have to do a lot better by our trans* gender siblings than this.

An Exercise for Explaining Gender Policing

Here's something I wrote as a tool for helping people to understand and empathize with the corrosive influence of gender policing:

Think about something that you are or do that is very important to you, and that you've worked very hard on. Something at the core of your sense of self. Maybe it's being strong, or kind, or honest, or analytic. Maybe it's being a teacher, or a dancer, or a good parent. Have an identity in mind?

Now imagine that every time you leave your apartment or house, you run into people who undermine that identity. Grocery store clerks say, "Can I help you, weakling?" Sometimes they do it casually, saying "Excuse me, liar," as they brush by. Other times they're confrontational: "You are a terrible parent and you make me sick!" And sometimes they treat you like a joke, elbowing one another as you walk past, snickering and muttering, "Look, it's one of those ridiculous bad dancers." This happens to you day after day, year after year. Not everyone acts like this, and you have friends who tell you that you are indeed kind or logical or whatever and to hang in there. But the majority opinion is that this is just what you should expect when you decide to do something strange like be a teacher or be honest. And every day, people undermine and mock you.

How would you feel? What would happen to your self-esteem, your character?

This is what it's like to encounter gender policing. People call you by the wrong pronoun in a loud voice. Strangers confront you, comment negatively on your appearance, tell you to stop trying to be some gender they are sure you are not.

People have to deal with gender policing every day because they are intersex, trans, queer, living with a disability, or none of the above but simply. . . different looking. Gender policing is especially intense if you're perceived as a visibly trans gender woman. This is something we have to solve as a society--those who are marginalized by it can't do it themselves.

Gender policing is insidious, cruel, and pervasive. Please, friends, name it as a social problem. Think about how you might participate in it, and resolve to change that. Notice when people say gender policing things around you, and confront them. Teach your children to appreciate sex and gender variability. Please help us work toward a world in which people are judged on the content of their character, not on the conformity of their appearance.