Trans Women on the Margins

This is a post aimed at my queer community allies, with some simple and hopefully entertaining illustrative charts.

As a trans man, I need to say that I am sick of seeing queer people dump on trans women.

Why would people marginalize others who are supposed to be part of the same LGBTQIA community? Occasionally I encounter it when I'm speaking with older lesbians who still buy the Evil Empire rhetoric that trans women are really men who are trying to smuggle their phallic privilege into women's safe spaces, in order to run the whole world and sneak peeks in women's bathrooms. More often I'm in a space dominated by gay male politicos where trans issues as a whole are thought of as distracting--something that scares off the Main Street straight supporters who might otherwise support same-sex marriage. But sadly, I run into it regularly in the sort of spaces I'm told should be most comfortable for me: spaces full of educated, activist, third-wave-feminist queer folks. The kind of places, ironically, where androgyny and genderquerity are celebrated as radical and transformational.

A while back I had a conversation with a young white cis lesbian--let's call her Sadie. Sadie had recently, she said, "discovered" trans men. (Perhaps we are some sort of continent. . .) She was telling me how cool she thought I and other trans men were, because we "got" sexism, having seen firsthand how women are treated. I chatted a bit about how gender transition is an interesting window into sex discrimination, as studies show that upon transitioning, trans women make significantly less money than they had previously, while trans men make about the same, or a bit more. Sadie paused a moment, then said, "Well, I don't know about trans women." I asked what she meant, and she replied, "I guess I've mostly only seen them on television, and they look like glamorous living stereotypes." I agreed that television gives a very limited view of what trans women are like--just as the images of (cis) lesbians in the media are usually either of hot femme chicks who are meant to appeal to male fantasy, or of butch women who are presented as the opposite of sexy. Sadie replied, "OK, that's true. But I'm still not sure about transsexual women. One did hang out with me at a party once and it was kind of freaky." I asked what she meant and she said, "I don't know, she just. . . well. . . didn't really look like a real woman, you know what I mean?"

At this point in the conversation I ran out of tolerant educational patience, and just said, "No, I don't know what you mean. You do realize that there are plenty of homophobic people out there who complain that lesbians don't look like 'real women.'" Sadie got flustered and replied defensively, "Yes, but she made me uncomfortable when she hung out with me at the party that night. I have a right to feel safe."

Dear Fellow Members of the Assigned-Female-At-Birth Queer Community: you have an absolute right to be safe. No one should be permitted to harass or harm you. But you do not have a right to feel safe, if you're going to define that as being free from challenge to your preconceptions. Protecting yourself from threatening acts is important, but treating another person as a threat just because you're uncomfortable what they look like is juvenile prejudice. How can you demand that society at large accept your gender transgression and your nonconforming appearance, say too bad if people think you look or act weird--and then turn around and tell other folks to conform to your expectations or you'll declare them weird and exclude them so you can feel nice and safe?

Look, I'll make it simple with a couple of charts. Yes, they're tongue-in-cheek. This is the universe of queer people, as viewed through the eyes of bigots you despise: 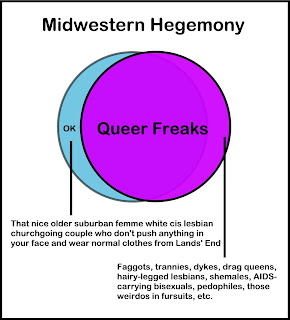 You see how most queer folk are marginalized and villainized, as you deplore. Now, here's the queer universe as seen from a transmisogynistic position: 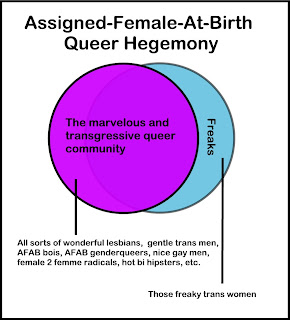 Now the purple circle of querity is a circle of joy--yay--but trans women get excluded from the party. Well, unless they look and act just like cis queer woman, in which case you'll permit them entry in exactly the way that the Midwestern homophobes you detest tolerate that churchgoing, Lands'-End-wearing, quiet lesbian couple.

Before I get in trouble, let me reiterate that I myself am a member of the queer community who was assigned female at birth. I have plenty of great friends of every sex and gender location on the map who stand arm-in-arm with trans women and others who are especially marginalized. I'm not trying to demonize any group.

All I really want to say is please, avoid hypocrisy. Don't marginalize others for the very same reasons bigots marginalize you.
Posted by Dr. Cary Gabriel Costello at 2:46 PM