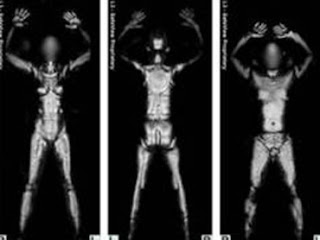 Recently I had an unpleasant experience while travelling: for the first time, I faced TSA screening at the airport with an “Advanced Imaging Technology” body scanner. These are the devices that see through clothing, with the supposed intent of revealing hidden weapons or explosives. While they haven’t yet foiled any terrorist plots, they do lead to a great loss of physical privacy, and for trans people, add a new level of anxiety to air travel. And as my experience illustrates, that anxiety is justified. We are treated as if our bodily differences pose some sort of potential terrorist threat.

I am a trans man. While I am legally male and my ID reflects that, like many trans people I have not had any reconstructive surgery. It is expensive and not covered by my insurance, and while I would like chest surgery, as someone born intersex I am not interested in genital reconstructive surgery. I therefore wear a chest binder and a genital prosthesis. Wearing the binder and genital prosthesis is very important to me. While I’m not in the closet about being trans, I am fortunate in that with my beard and substantial body hair, while wearing the binder and prosthesis my male identity is rarely questioned by strangers, despite my lack of surgery. This gives me the privilege to avoid a lot of harassment that trans people suffer all the time when their trans status is visible to the public.

Traveling while trans is anxiety-producing. Many trans people, especially trans women, have had experience facing harassment from police officers and others in uniforms, and having to be screened by stern-faced uniformed TSA officers isn’t comfortable. Any “discrepancy” in ID is cause for being detained and denied access to one’s flight, and this includes a perceived discrepancy between the gender marker on one’s ID and the TSA agent’s reading of one’s gendered appearance. I’m fortunate enough that no agent has ever questioned the M on my license based on a visual inspection. But body scanners see beneath clothing. . .

I’ve traveled by plane a fair number of times since my legal transition, but always managed to be screened through a standard metal detector before. Though I’ve been concerned about being outed in the process, I’ve never had a problem. In March, however, that luck ran out, and while flying to a conference to present on intersectional identity and intersex issues, I wound up having to go through a body scan. After stepping through, I was told that the scanner revealed "multiple anomalies.” I looked back at the display and saw four markers appearing over the outline of my body: two at the top of my left ear where I have two earrings, and two on my chest, one over each nipple area.

I’d always been most worried about being found to be wearing a genital prosthesis. Other trans men have had problems when outed as wearing them during TSA screening in the past. Complaints about this have in fact helped lead to the one explicit TSA screening policy said to protect trans people: “travelers should neither be asked to nor agree to lift, remove, or raise any article of clothing to reveal a prosthetic and should not be asked to remove it.”

But what the scanner picked up on, besides the fact that I have a couple of earrings, were “chest anomalies.”

I was taken aside for a patdown. I asked that this be done in privacy, and was taken to a room by two TSA (cis) male agents. One blocked the closed and locked door, and the second stood in front of me. They asked me to answer yes or no, did I have any medical implants or a pacemaker, and I said no. I was then given a through full body patdown, which took some time. The agent doing the patdown seemed concerned that I was concealing something under my shirt. I could have explained what the issue was, but the TSA agent, while acting thus far in a detached and professional manner, had not given me any opportunities to speak spontaneously, but just allowed me to answer yes or no to his questions. The question he asked me next was whether I was wearing a back brace. I said no.

The TSA agent then asked me to open my shirt. While I am uncomfortable revealing my chest wearing just my binder, I did so. The two TSA agents then stared at my chest in the binder for a while. The TSA agent doing the patdown finally asked me what my garment was. I said that it was a chest binder, which I wore because I was a trans gender man. The agent said, “A what?” I had to explain what that meant. The agents looked both dubious and uncomfortable.

I was extremely concerned that I was going to be asked to remove the binder, but, after some silent staring and thinking, the TSA agent told me he would screen the garment for explosives with swabs while I was wearing it. While less humiliating for me than being forced to reveal my breasts, the screening for explosives involved having the agent thoroughly rub a series of small swabs over the entire surface of the binder: sides, back and front. This was quite psychologically disturbing for me. The TSA agent’s expression was one of controlled distaste.

After my binder was indeed found not to be a terrorist weapon, I was allowed to leave. The process was not only humiliating, but time consuming, and I had to rush for my plane.

As my experience reveals, it is obvious that the TSA agents need additional training on dealing with trans gender travelers. The TSA agents who screened me were not only completely unfamiliar with what a chest binder is, they had apparently never even heard of trans men. Their standing there staring at me in me with my shirt open to reveal my chest binder while apparently trying to evaluate whether what I said was plausible was very embarrassing to me. The thorough swabbing of my binder involved what was essentially a groping of my chest. Trans people like myself who have not been able to access the reconstructive surgery that we wish are often very private about our bodies. Having to expose my chest triggers dysphoria for me, and I wear my binder even in intimate situations with my spouse.

Some trans organizations have been quite encouraged by the federal policy stating that TSA agents are not to ask travelers to reveal or remove their prosthetics. A group of which I am a member posted the TSA website, including this policy and the link to a complaint procedure for violations of TSA regulations. So I followed the link and filed a complaint. In it I noted that TSA agents such as those who screened me obviously need training in dealing with trans passengers. I wrote “This training must include the fact that the majority of us have not ‘had the surgery,’ because of the high uncovered expense, and that our nonconforming bodily status is something we keep deeply private. The training should spell out the prosthetic devices and garments we may wear, such as penile prosthetics and chest binders for trans men, and breast forms and tucking underwear for trans women. No passenger should be asked to reveal these prosthetic items or garments or to remove them. Furthermore, if a body scanner reveals ‘anomalies’ in the chest or groin areas, TSA agents should be instructed to ask if the passenger is trans gender and is wearing any special undergarments or prosthetics because of that. If the passenger says yes, then the ‘anomaly’ is explained.”

Unfortunately, my complaint led to no results. The official who reviewed it for the TSA Office of Civil Rights and Liberties did not find a violation of policy (I presume because in his view, I was not asked to reveal or remove my genital prosthesis, and a chest binder is not a prosthetic). He viewed the complaint as one not of violation of my civil rights, but as an issue of professionalism, and forwarded my complaint to the TSA Contact Center to be addressed. That office sent me a form letter “response” from a do-not-reply email address. The form letter merely repeated the information posted on the TSA website: that passengers must be screened; that body scanning equipment will detect prosthetics; that if an “anomaly” is revealed, the passenger must accept a pat-down or be refused access to the terminal; and that passengers may request a private pat-down. I wrote back to the Office of Civil Rights asking that I receive an actual response to my request for further TSA training, but never got a reply.

After my experience, I do have some advice for trans travelers. If you wind up in line for a body scanner, be aware that you can ask to skip it and have a pat-down. If you do go through the scanner, if you look back at it you will see a small simplified display with an outline of a body, and colored rectangles over any detected “anomaly,” which will let you know, if you are called aside for further screening, what part of your body they will focus on. You can then, if you wish, pre-emptively state to the agents that you are wearing a binder or breast forms or whatever seems the likely issue. I’d suggest calmly stating that TSA policy forbids requiring a passenger to reveal or remove a prosthesis. You also have the right to request a private screening (although, if the TSA agent seems hostile and you fear mistreatment, a public screening may in fact be safer, even though it involves more public stares).

I’d also suggest that if you are subjected to bodily scrutiny as a trans person that makes you uncomfortable or delays you, that you complain to the TSA Office of Civil Rights and Liberties. I didn’t get a response, but perhaps if you specifically state that you believe your right not to have to reveal or prosthetic was violated, you would. In any case, the more complaints they receive, the more likely it is that eventually something will be done, or at least that someone can document how many complaints have been filed with no result.

For now, anyway, as trans people we have to deal with a system that treats us as potential terrorists because of our bodily differences, which is nonsensical and insulting.
Posted by Dr. Cary Gabriel Costello at 1:02 PM