On Trans Gender Identity and the "Intersex Brain" 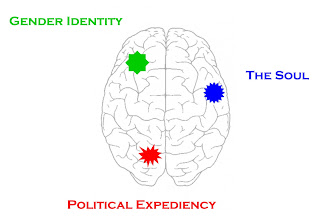 Once upon a time, in the fairly recent past, people often asked what made a person gay or lesbian—taking the perspective that homosexuality was a pathology that needed explanation. Various theories were proposed: psychological (could a domineering mother and passive father be the cause?); moral (was it a failure to embrace “traditional Christian family values”?); and biological (was there some hormone imbalance or brain abnormality at fault?).

Today, when someone comes out as lesbian, gay, or bisexual, the question of etiology is rarely raised. Lesbian, gay and bisexual rights advocates are much less likely to spend their time tossing back at the homophobic the questions, “What made you straight? When did you realize you were straight? Could you do something to change your heterosexuality if you tried?” Sexual orientation is generally treated as a fact, something that is not pathological and that requires no etiological explanation.

Back in the 20th century, however, many advocates for “gay rights” sought to find a physical cause for homosexuality. They hoped that finding proof that there was some immutable, biological reason for homosexuality, beyond the individual's control, would lead to greater social acceptance. In fact, it was political activism, not scientific discoveries, that led to the social shift to viewing LGB people as a minority deserving of protection from bigotry. But for a while, many “gay rights” activists were focused on finding proof that there was such a thing as the “gay brain,” and research on the topic persists today. The size of the hypothalamus of gay men has been argued to be more similar to straight women's than straight men's. It's been posited that straight men and lesbians have brains with a right hemisphere slightly larger than the left, while straight women and gay men have balanced brains.

Implicit behind these arguments is a belief that gay men are in some way effeminate, and lesbians masculine. But LGB activists scoff at this belief today—the idea that gender expression relates to sexual orientation now seems offensive and ridiculous. So while scientific research continues to look for ways in which gay male brains are “feminine” and lesbian brains are “mannish,” LGB rights advocates no longer pay much attention.

We've not come to this point, however, in the struggle for trans gender rights. Trans people today are making strides, but we're now in the position LGB people were decades ago. We face a great deal of discrimination and disgust from the cis gender population, and we are constantly asked, “What made you trans? Was it psychological trauma, is it that you don't respect traditional Christian family values, or is there something wrong with you medically?”

And just like lesbian, gay and bisexual people in the 20th century, trans people today face such virulent bigotry that many trans people hope finding scientific proof that there is some immutable, physical reason for trans gender identity, beyond the individual's control, will lead to greater social acceptance. Today many trans activists are eager to trumpet neurological studies that purport to show that the brains of trans men are more like the brains of cis men than of cis women, or that the brains of trans women are more like those of cis women than cis men.

It was the philosopher Descartes who first argued that the brain contains localized areas that control the body. He declared that the soul occupied the pineal gland—a theory sounds ridiculous today, when we know that the pineal glad is more prosaically the structure that secretes melatonin. But today, many trans people (it must be clear by now that I am not one of them) are looking for a brain structure housing gender identity. They argue that people are born with a “brain sex,” and that if this “brain sex” differs from the individual's genital sex, they suffer from an intersex condition that must be treated via gender transition.

I am deeply uncomfortable with this intersex theory of gender dysphoria. While I know from personal experience that it gives some trans people great comfort, and while I worry about seeking to demolish what others feel is their life raft, I want to lay out my objections.

My first objection is a scientific one: gender identity and gendered behavior are deeply complex. They are no more located in the hypothalamic unciate nucleus than the soul is located in the pineal gland. If many of ares of the brain are involved in something as comparatively simple as speech, how many more must be involved in matters as complex as sense of self?

A second objection relates to the entire field that Cordelia Fine names “neurosexism.” Basically, the entire field of neurological study of sex differences is pervaded by sexism and flawed by a teleological approach: “We know that men are good at math, logic and sport, while women are good at nurturing and communicating, so let's pin these to some brain differences we can locate.  This will show that politically-correct resistance to the idea of eternal gender roles is pointless.” By linking claims to trans rights to this body of science, we're tying ourselves to gender stereotypes and a regressive social agenda.

A third objection is that the brain is a very “plastic” organ, meaning that it changes over time. For example, when a deaf person communicates via sign language, different areas of the brain are “recruited” to process communication than just those used for oral speech. Furthermore, early and late learners of sign have different patterns of brain activation when they observe another person signing. In other words, the brain, like other parts of the body, is affected by life experience and use--it varies greatly from individual to individual, and for one individual over time. Even if we were to find that trans men resemble cis men in their patterns of brain use, this would not mean that such a similarity is inborn. It would just mean that trans people have life experiences similar to cis people who share their identified sex, cultural norms, and gendered behavior.  This is certainly proof that we experience our gendered identities and lives in the same way cis people do.  It is not proof that trans people are born with intersex brains.

Another objection I have is to the foundational premise at hand: that trans men and cis men are uniformly masculine in their gendered behavior and style, and hence distinct from feminine trans and cis women. In fact, there are plenty of men, cis and trans, who are nurturant parents, or who like the color pink, or who are bad at sports. There are many women, cis and trans, who are dominant athletes, have bad verbal skills, are excellent at spatial relations, or who hate primping. Furthermore, plenty of trans people are nonbinary in identity, which can't be explained in the least by this dyadic, reductionist framework.

I also object as someone who is intersex by birth to the framing of trans identity as an intersex condition. The difficulties faced by intersex people can indeed relate to gender identity, since children born intersex today are forcibly assigned a dyadic sex at birth, and often subjected to sex reassignment surgery to which they cannot consent. If the child grows up not to identify with the sex to which ze was coercively assigned, gender dysphoria results. But no test has ever been developed that can determine what the eventual gender identity of an intersex person will be—not in the brain, the chromosomes, the gonads or the genitals. And the issues intersex people face center on forced sex assignment in childhood--something which advocates of the intersex brain thesis tacitly support when they argue that since trans status arises from an intersex brain, it "must" be treated medically. Like many intersex people, I boggle resentfully at the idea held by some trans people that intersex people are “lucky,” have a privileged relationship to the medical community, or are free from stigma in our lives. The belief that being categorized as intersex would lead to advantages, which causes some trans people to frame trans identity as an intersex condition, is deeply flawed.

Finally, I would argue that this entire issue is a distraction. Remember that it was not the discovery of a brain area “causing” homosexuality that led to the relative successes of the LGB community in gaining civil rights. It was activism that led to those gains. The belief that if differences could be shown to be inborn, liberation would result, seems hopelessly naïve to me. Bear in mind that for many decades, scientists argued that women should not be permitted to vote or attend college because their brains were too small. More starkly, consider the Holocaust, which was founded on a belief in inborn racial inferiority.  Some intersex conditions can be detected prenatally, but this has not led to more widespread acceptance of intersexuality.  When these conditions are detected, doctors typically offer to terminate the pregnancy.

For all these reasons, I urge people not to hitch the wagon of trans rights to the idea of inborn, dyadic, neurological differences. Brains are extraordinarily complex and shaped by culture and experience over time. Gender identities are multiple, gender roles constantly evolving, and gender expression varies widely from individual to individual. Intersex people face huge obstacles, and framing us as the lucky group to be emulated denies our suffering.

The solution to transphobia is not neurology, but political activism.
Posted by Dr. Cary Gabriel Costello at 5:22 PM