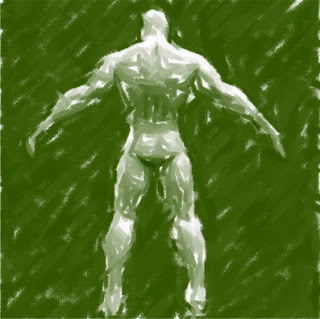 It may seem like an odd thing for a trans guy to say, but I've realized that I'm more secure in my masculinity than many men.

It's peculiar because, like other trans folks, I have to live with a great mass of cis people perceiving my gender as “fake.” I know that lots of people think that guys like me can't be “real men.” Many flatten all issues of sex and gender down to genitals and judge trans men as deficient, whether we've medically transitioned by one route or another, or not. Others prejudicially deny the reality of gender transition. They claim they can spot us a mile away, and if they can't, that we've deceived them, and deserve to be threatened with violence or humiliation.

You'd think that living under such circumstances would make me much less secure in my masculinity than most cis men, but I've not found that to be the case. It's not that I'm some icon of rugged manhood. I'm 5'2”. I have the musculature of a middle-aged college professor, which is what I am. I bind my chest, and my knees creak.

But all of that is fine with me, because I have no fear that it negates my male status. I am a man because I identify as such. That's all there is to it. I've walked the awkward and bemusing path of gender transition, and while I'm not done with that journey, I am fortunate enough to now be acknowledged as legally male, which certainly doesn't hurt. But by the precepts of the trans ethos, a person's gender is determined by their identity—not by the size of their feet or their phalloclitoris; not by whether they excel or suck at sports; not by bureaucratic rules or the marker on their passport.

However, for so many cis men, manhood is governed by the Code of Masculine Honor, not gender identity. According to this Code, status as a “real man” is a privilege, and can be revoked at any time. And what negates it is any whiff of feminine gender expression. Masculinity is defined negatively as the rejection of all things feminine, and femininity is defined through a disturbing concatenation of weakness, sexual desirability, technical incompetence, emotional tenderness, powerlessness, nurturance, and beauty. The result is the fodder for so much humor, middle-school fag-baiting, and towering insecurity based on feminine challenges to “true manhood.” A dude can find his masculine honor called into question in innumerable ways.  It could be by being discovered by others to be walking a chihuahua, crying at a “chick flick,” earning less than a female coworker, having a gay son, shaving his legs, being unable to throw a football, holding his girlfriend's purse or his daughter's Hello Kitty backpack, being technically incompetent and relying on his wife to fix the car or the computer, enjoying ballet, losing an armwrestling match to a woman, being a “cuckold,” or wearing any one of a panoply of feminine-coded garments, accessories, or cosmetics.

It's a tediously familiar scene. The new kid at school is discovered to lisp. A man at the office is publicly dressed-down by his female boss. As a guy bends over to tie his shoes, lacy underwear peeps out of his pants. What follows is a ritual tormenting by a group of other males: the victim is called a sissy, a bitch, a fag, a wuss, a GIRL, often in high-pitched, mock-feminine voices. The challenge to masculine honor is iconically avenged through violence—honor restored if the victim becomes the dominant aggressor. There are other ways out. The victim can clown around and try to turn the hazing into a joke. He can verbally disdain the harassment and assert that he has other forms of masculine power that matter more (income, political power, sexual prowess, physical strength). He can defend sensitive modern manhood. But under the Code of Masculine Honor, only the response of physical reprisal is seen as fully restoring “real man” status. Deck your challenger, and you can stand over him and crow, “Who's the bitch now?”

The ritual enforcement of the Code of Masculine Honor leaves swaths of cis men eternally insecure about their masculinity. Nobody can embody all of the precepts of ideal manhood—being tall and muscular and hung like a horse, able to fix machines with ease, being a sports hero, a deadly fighter, having political authority over others and enviable wealth and harems of nubile sexual partners. That's the stuff of fantasy. Of comic book heroes and gangsta personae. Mere human males can never meet such a standard, and so all are left aware of their “failings.” And to deflect attention away from these failings, the insecure call attention to others' in the endless ritual of hazing. They avoid any association with “sissies” and “fags”--even if they themselves are gay. Just look at all the men-seeking-men ads that frame the seeker as hulking and “straight-acting” and not interested in feminine men.

The thing is, the Code of Real Manhood doesn't just hurt men. It's built around class privilege and homophobia, and most especially, around misogyny. It centers on the idea that femininity is humiliating—that the worst thing imaginable is to be a “girl.” For this reason, feminists have long critiqued it, and championed gentle, sensitive masculinity. This is turn has led to one of the most longstanding and powerful bits of antifeminist rhetoric: that feminists are seeking to “unman” men. We may live in an era in which masculine behavior is evolving. Today, a man may change his baby's diaper without being laughed at as henpecked, as he would have been in the 1950s. Guys may pluck their unibrows without causing much of a stir. Middle-school boys may chide their friends for calling everything they dislike “gay.” But the hazing maintenance of the Code of Real Manhood retains great potency.

Gender transition has brought me many good things. One of these is that in order to do the hard work of coming out to family and friends and coworkers and negotiating the many hurdles of gender transition, I had to reach a place of surety that my masculine gender identity defined my status as a man in a way others must respect. This gave me security in my manhood. But gender transition also came with some “gifts” I could do without. One of those was a welcome into the world of random challenges to fight. As an academic and a shrimp, I don't get a ton of them, but it periodically happens. A guy cuts me off pulling out of an alleyway nearly causing an accident, and then storms out of his car and tells me to be a man and get out of mine, spoiling for a fight. Three large young men brimming with insecure cockiness follow me down a street, commenting on how faggy my pink hair is and how I'm too much of a faggot to turn around when they're talking to me.

Though I find myself in these situations, I've yet to get into a fight. One teenaged boy slugged me once and ran off, but that was random and not interactive enough to count as a “fight”--which is exactly the point. I haven't found myself in a fistfight because I don't rise to the bait to defend my masculine honor. It's not that I don't feel that if I had to defend myself, I couldn't. (And I don't say that to prove I'm a man—I think that most people of any gender can learn to defend themselves if they have to.) I don't rise to the bait because I don't feel challenged. My masculinity is not based on my vehicular dominance or the color of my hair or my physical strength, but on my gender identity. Inside, when I'm called a “fag” for dying my hair pink for a while, I'm rolling my eyes. Outwardly, being sane, I simply don't respond. And when my cheek is metaphorically slapped for a ritual duel and I don't return the slap, generally the fight fizzles. The Code of Masculine Honor is not served by fighting with girls, or with people who don't care if you call them one.

That doesn't mean I don't think the Code poses a serious problem for trans people. Those who enforce “real manhood” guard its territory closely, and are often hugely transphobic. They refuse to let people in or out of the man club based on their gender identities. While as a trans person I don't feel undermined by claims that my behavior is incompatible with honorable masculinity, I'm deeply hurt when people assert that I am literally not a man. And I am fearful of the fact that some defenders of “real manhood” engage in a very ugly form of violence—not individual duels of masculine honor, but warlike boundary guarding, involving group attacks on people who reject the archaic Code: fagbashing, gang rape, brutal trans murders.

The sad ubiquitous fact is that trans women are at particular risk from enforcers of the Code of Masculine Honor. From the perspective of the Code, they enact the ultimate treason when they leave the man camp to embrace their female identities. In asserting that they experience being a woman as preferable to enjoying the privileges of masculinity, they speak heresy.

As a result, women who are visibly trans gender suffer appalling levels of violence. I ache for what my trans wife must cope with on a daily basis: the ongoing harassment; the regular challenges to fight posed through body-checking and name-calling; the random terrorism of boundary policing in the form of bottles thrown at her out of cars or attempts at sexual assault. Whereas I face few overt threats, and have been able to diffuse them, the level of violent enforcement of the Code of Masculine Honor she encounters makes it hard for her to live a life not constantly on the defensive.

And what I find particularly sad about the violence my spouse faces is that most of it comes from men who are marginalized, and face challenges under the Code due to that marginalization. Guys with low incomes and men of color. Self-hating, repressed homosexuals. Pubescent boys. It's amazing how often the men who get in my spouse's face and tell her she's a “disgrace” are very short.

The Code of Masculine Honor operates not only to perpetuate masculine privilege, but to perpetuate marginalization. It keeps men who face discrimination for various reasons from uniting to change systems of social power. It mobilizes insecurity to divide and conquer. And it generates a constant level of self-doubt that leads to a situation in which I, a trans guy, am more secure in my masculinity than so many of the cis-privileged men around me.

As a man, I say down with masculine honor.