American Attitudes Towards Trans People Are Not Great 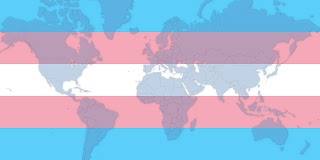 Americans seem to have the impression that LGBT people in the U.S. have more rights and get more respect than in most places. In particular, I've run into many Americans who think that trans rights have been advancing here at mach speed. If they're transphobic, of course, they frame this as some horrible threat to society that must be undone. But I've encountered a lot of cisgender Americans who understand themselves as generally supportive of the LGBT community who still say that the pace of change when it comes to trans issues has been so fast it's hard for them to keep up, so let's just slow down. The U.S. may be the most socially advanced country, but we don't need to get crazy.

Well, this fall an international study was conducted in 27 countries on attitudes towards trans people. And what it shows is that rather than being the most "advanced" in its acceptance of trans people, the U.S. population has a much more negative attitude towards trans people than the norm.

2. Americans are three times more likely to say being trans is a mental illness than are citizens of Italy, Spain, Argentina or France.

3. Americans are more likely than study participants in any of the other surveyed countries to frame being trans as "sinful."

4. "Americans are the most likely to say that society has gone too far in allowing people to dress and live as one sex even though they were born another (36%), while people in Japan are least likely to agree with this sentiment (9%)."

So, you may hear people telling you that America is "way out there" when it comes to trans rights, and needs to slow down. In fact, the U.S. is dragging way behind the international community when it comes to accepting and supporting trans people.
Americans need to know that, step up, and do better.
Posted by Dr. Cary Gabriel Costello at 7:17 AM