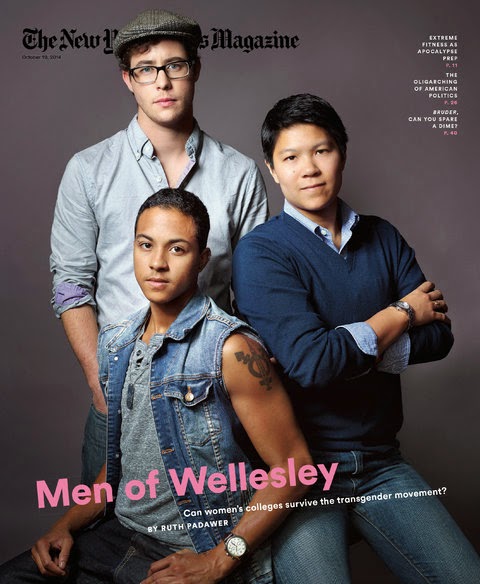 This weekend, the NY Times cover story was on trans men at women's colleges.  I found the article very frustrating, first of all due to the title, "When Women Become Men at Wellesley."  Dear NY Times: trans men are coming out at college, which is different from cis women "becoming" trans men.  Your title is as off-base as one reading, "When Straight Women Turn Into Lesbians at Wellesley."

The subtitle of the article is "Can women's colleges survive the transgender movement?" The answer to this hyperbolic question is obviously yes.  The reporting in the article itself is much less inflammatory, so let's just re-title it in our heads to match the actual content--something like "Women's Colleges Struggle with the Place of Trans Students"--and consider that content.

I understand why trans men wind up in women's colleges. If you're a young person who is assigned female at birth, and you are struggling a lot with gender issues, a women's college might seem a good place to go.  One student in the article, Jesse, says "he chose to attend Wellesley because being female never felt right to him.  'I figured if I was any kind of woman, I'd find it there.'" It's actually quite common for people struggling with trans identities to enter institutions highly centered around the sex they were assigned at birth--for example, many trans women report joining the military or entering highly masculine fields such as firefighting to see if those institutions can reconcile them to living in the gender expected for someone of their birth-assigned sex.  Of course, the result, for many, is to realize they do not identify with that gender at all.  And so it's right and good that students who realize they are trans come out.

But once a trans man or masculine-of-center genderqueer person comes out at a women's college, they have to face the fact that they are a man or masculine-of-center person in a woman's space.  Personally, what I would do at that point is start making arrangements to transfer to another college, because I support the existence of women's colleges in a patriarchal society, and the whole point of them is that they are for women--and I am not a woman.  That said, I don't believe that transmasculine students should be required to uproot themselves and transfer out.  Leaving a college can be emotionally difficult and have financial repercussions, and a transitioning student has a lot on their plate to deal with. I believe that an ethic of care demands a struggling transmasculine student be permitted to stay, and be treated with respect as a man or genderqueer person.

But there is a big difference between accommodating struggling transmasculine students and having trans guys make women's colleges all about them.  And that's exactly what I'd call it when trans men keep insisting that when these colleges call themselves "women's colleges" without adding "plus some transmasculine people" they are doing evil.  That's exactly what I'd call it when trans guys demand that students should stop calling their classmates "sisters" and start calling them "siblings."  I absolutely agree that it undermines one's identity as a man to be referred to as a sister, and I'd hate it too--which is exactly why I would not stay at a women's college.  To stay, and then insist that your needs as a man outweigh the needs of everyone else who chose to go to a women's college . . . that's hubris.

I've certainly met my share of trans men with hubris.  When someone transitions from female to male, they face hurdles in the form of cissexism and negotiating legal and often medical challenges--but they also gain male privilege.  All trans people are aware of the challenges they are facing.  But many trans men seem little aware of the male privilege they are gaining.  That's normal, in the sense that most people are unaware of most of their privileges--but it's ironic when you encounter it in someone who talks about patriarchy and cis privilege, as I have.  Just like a cis man, a trans guy can be oblivious to his own privilege, taking over conversations about sexism in a circle of cis women, or transmansplaining cissexism to a trans woman.  You see, when someone who is being respected in his male identity talks, whether he is cis or trans, people listen more attentively than they do when a woman talks.  That's basic patriarchy, and I've certainly experienced the difference in how my statements are taken more seriously as a result of transitioning to male status.  If you're expecting it and looking for it, as a man, you can see it some of the time and catch yourself.  (I'm sure it happens often without my recognizing it.)  But I've met my share of trans men who conflate their new male privilege and the greater deference they are granted with their gaining confidence and coming into their own as they transition.  They presume people pay such attention to what they say now because they have fascinating things to contribute.  And at a women's college, where young men are a novelty, this effect of attention centering on a man is exacerbated.  (Some of the ways this manifests in the article are pretty creepy, in terms of cis women proving they can be "tranny-chasers" too, but trans men like Jesse report loving having become popular and having people "clamoring" to date them.)

Personally, were I a woman at a women's college, I'd be upset at trans men telling me not to presume my dorm or class was a women's space.  My accepting of transmasculine students would not contradict the fact that they are sojourners who chose to enter a rare territory designed for women.  I guess I'm just fascinated, given the uproar that many cis feminists made when trans women tried to participate in women's events like the Michigan Womyn's Music Festival, specifically so that they could be with other women, that when trans men plant their flag and actually say "stop calling this a women's space," the opposition is so minimal.

Which brings me to the topic of transfeminine students in this article--a brief bit near the end of the piece.  I find it very disappointing that an article about women's colleges should give trans women such little attention, while devoting masses of space to transmasculine people.  Look: fundamentally, trans women belong at women's colleges, and trans men don't.  But there's little to report, given that no trans woman has ever attended Wellesley, as far as anyone knows.  (If one did, she did it utterly in the closet, and at great personal risk.  Such things have happened before, however--Anita Hemmings, a woman of African descent, passed as white and graduated from Vassar in 1897, though she was outed in the last weeks of her exemplary college career and kicked out, lucky to have a diploma mailed to her afterwards.)

What really disturbs me is that much of what the article conveys on the topic of trans women entering Wellesley is the opinion of some trans guy.  He says that trans men and genderqueer people who were assigned female at birth belong at Wellesley--but that trans women should have to face barriers to admission, and be treated with suspicion.  No trans woman should be admitted, he declares, unless she can prove she's started medical transition or has changed her name legally (steps very difficult for someone of a typical age to be applying to college to have taken, requiring parental support for the transition and financial resources).  Why this disparity? To keep Wellesley a safe space for women, of course! If she hasn't had medical and/or legal interventions, a trans woman might not really be a woman, he claims. Taking the difficult steps of coming out and applying to Wellesley as a woman aren't enough proof of her commitment! Maybe her identity is fluid and she'll identify as a man again . . .  But hey, aren't genderfluidity and lack of interest in medical interventions treated as fine in transmasculine people?  Yes, says the trans dude. "Trans men are a different case; we were raised female, we know what it's like to be treated as females and we have been discriminated against as females.  We get what life has been like for women."

This argument is appalling on so many levels. First, it is exactly the reasoning used by "gender crits" and Trans-Exclusionary Radical Feminists to "prove" that gender transition is an impossibility: that gender socialization is rigidly binary, inescapably tied to birth-assigned sex, and sex assigned at birth is thus immutable. The thing is, the TERFs are at least logically consistent in saying that this means not only that trans women are "really" eternally men, but trans men "really" eternally women.  It's transphobic logic--yet it's being voiced here by a trans gender person.  How is this possible?  Enter transmisogyny: the trans Wellesley student applies it only against trans women, while ignoring the implications of the argument for trans men like himself.

Underlying the ability of this trans man to assert a transmisogynistic logic while refusing to see how it applies to trans men is that hubris again.  Look, he basically says, a trans woman on campus might make cis women feel uncomfortable in what's supposed to be a women's safe space!  But apparently it never occurs to this student that a cis woman seeing him in her dorm at night might feel unsafe.  He presumes (a) that women can always tell if a given man is cis or trans at a glance,  (b) that everybody agrees trans men are always "safe" in a way cis men are not, and (c) that if a woman did feel unsafe seeing him in her dorm, her reaction would simply be wrong, as he is Mr. Perfect Nonthreatening Male of Female Experience, and can tell her what she should feel.

For a trans man to believe that trans women pose a threat to female safe space, while transmasculine people should be allowed free access to women's spaces--that demonstrates a combination of patriarchal egotism, lack of awareness of one's own male privilege, and transmisogyny that I deplore.